Hednesford claimed the local bragging rights with Matt Dodd scoring the only goal just after the hour mark of a disappointing Staffordshire derby. A crowd of 1,226 turned up on a hot Monday afternoon but there was little on offer to inspire them. The game had started ok and had James Wren not turned Richard Batchelor’s header away for a corner in the 3rd minute, it might have been a different story.

Hednesford got their first look in on 8 mins when Luke Rodgers created an opening but he sent his shot well wide. Louis Briscoe found Izak Reid well placed to put Rangers ahead on 15 mins but he screwed his shot wide of Wren’s right hand post. Hednesford upped the tempo with some short sharp passing but didn’t cause too many problems for Adam Whitehouse. Green sent one effort high over the top from the edge of the area while the best opportunity came from a James Lawrie free kick that flashed across the face of the Rangers goal but didn’t get the touch the Pitmen needed.

Hednesford were first to show in the second half with Whitehouse forced to keep out Green’s shot with his feet five minutes after the resumption. Soon after, Alex Melbourne hit a shot straight at the Rangers keeper. Richard Batchelor went close for Rangers when he got the better of Lawrie, only for Wren to save at head height at his near post but Hednesford still looked the most threatening.

On the hour, Whitehouse needed a second go to keep out a shot from Lawrie but he was left helpless a minute later. Tom Thorley was given acres of space all afternoon and finally made Rangers pay when he picked out Matt Dodd who, with one touch, took the ball past Whitehouse before rolling it into the unguarded net. In the remaining half hour, neither side looked like adding to the score as the two keepers were largely untroubled. The closest Rangers came was in the final minute when Sam Oji had to head off the line from a Jordaan Brown free kick.

We look to maintain our good start to the season on Bank Holiday Monday as we welcome Hednesford Town to Marston Road in the Evo-Stik Northern Premier Division.

Rangers have started the season the better out of the two sides with only one defeat this season, keeping three clean sheets in the three away games they have played this season as well as convincing score lines beating Altrincham 3-0, and Sutton Coldfield 4-1 in the first two matches.

Hednesford Town currently sit 16th in the Evo-Stik Northern Premier Division with just the single victory beating Halesowen 2-0, as well as drawing two and losing two games at the start of their campaign.

Kick-off 3PM. Social Club will be open before and after Monday’s game. 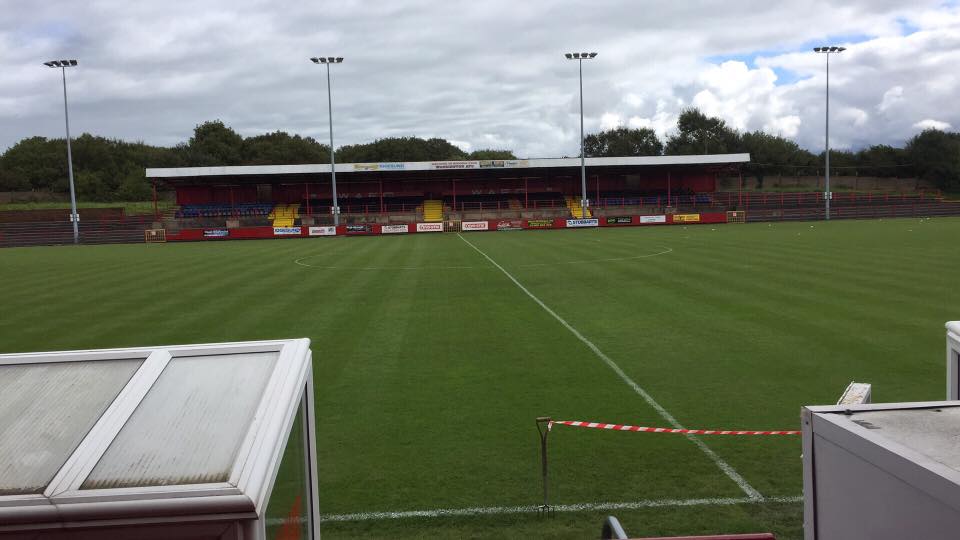 Stafford Rangers maintain their unbeaten away record for the season as they keep a clean sheet in a tough trip to AFC Workington which included a superb performance from young goalkeeper Brad Caswell, who stepped up to the challenge impressively with Adam Whitehouse unavailable.

Boro had the first chance after a quiet opening to the game, Bradley Fortnam-Tomlinson was unlucky not to score as he was just short of reaching the ball at the back post, as a cross came in from the right by Rangers striker Dan Westwood.

Workington then had the best chance of a quiet first half, the hosts had a free kick in the 27th minute which was swung into the area missing everyone except Caswell who’s finger tip save kept the score line level.

Workington carried on pressuring the visitors when a swirling effort from Symington from long rage, but the Stafford keeper on debut was level to the shot.

Dan Westwood nearly made it 6 goals in 5 games, as the ball deflected into the path of the striker off a Workington defender, however Westwood was unable to get full control of the ball before the Workington keeper was able to claim it.

The last chance of the game came from the visitors, Kieran Morris’ header was just wide of the target.

Dan Westwood made it five goals in four games as Rangers bounced back from Saturday’s defeat at home to Buxton to go top of the league with victory at Mickleover.

Mickleover shaded a frenetic start and were the first to threaten when Clinton Morrison and Ben Turner linked to set up Jimmy Phillips whose low drive was turned away for a corner by Adam Whitehouse.

Rangers were struggling to retain possession or make any real advance into the Mickleover half and when they did, the final ball was lacking.

With chances at both ends at a premium, Bradley Grayson should have done better when given time and space on the edge of the Rangers area. Instead, the Mickleover forward sent the ball high over the bar.

Grayson was in again a couple of minutes later when he beat the offside trap but Jordaan Brown defended well to clear the immediate danger.

The game badly needed a goal and it came in the 50th minute to that man Westwood.

Mat Bailey got his head to a Louis Briscoe corner and Bradley Fortnam-Tomlinson nipped in to square for Westwood who tapped in from close range.

Adam Whitehouse saved from Andy Dales and then kept out a close range effort from Mills before Grayson sent a free kick over the Rangers bar as Mickleover kept up their search for an equaliser.

Jack Sherratt blazed over with better options at his disposal while Westwood went over from distance and Mat Bailey headed wide as Rangers aimed to put some daylight between the two sides.

Mickleover sub Ben Morris forced a good save from Whitehouse just moments after coming on while Tom Burgin missed out twice going wide each time.

Rangers made certain of the points four minutes into added time with a breakaway goal. Izak Reid’s crossfield ball picked out brother Levi on the right and his cross was met by Westwood who headed in his second of the night.