News from the Board

We would like to announce that Andy Fearn and Alex Meechan will continue running the team until the end of the season.

Jake Charles has signed a contract until the end of the season.

This coming Tuesday sees us venture up the A50 again on our way to the New Years Day fixture at Mickleover. We lie 17th after 23 games with 24 points, and after their vital 1-0 win over Marine on Saturday, Mickleover are 19th (one place off the relegation zone) with 22 points from their 24 games. This game certainly has the dreaded 6 pointer tag. With our own managerial change, it is important that as many fans travel to this fixture to be out 12th man, and to ensure that we can make 2019 the turning point in our season to climb the table.

Mickleover were formed in 1948 and spent 44 years in the Derby and District League, but steady ground improvement work saw then accepted into the Central Midlands League, and from 1999 into the Northern Counties East. They joined the Northern Premier League family and got promotion into step 3 football for the 2010/11 season where we met for our first ever competitive matches the following season with a 1-1 home draw and 1-0 away defeat. That season Mickleover suffered their first ever relegation and we did not meet again until our relegation into step 4 in 2014/15 when we won 3-1 at home and lost 0-2 away. That was the season Mickleover went back up and saw another season of missing other till of course we were promoted the following year. 2016/17 encounters saw us get a double in 5 days with 1-0 home win on a Tuesday night followed by a 3-1 win at Mickleover on the next Saturday. Last season we have a 1-1 home draw with a 2-0 away win. Could last season’s results be replicated as we drew this seasons August Bank Holiday Monday game at Marston Road
1-1. Only time will tell.

Q&A with Alex, Andy and players

Thursday 3rd January Alex, Andy and the players will be in the social club after training about 8:00 pm where they will answer any questions that fans might have. We need to move forward together.

A statement from the board: It is with regret that today we have accepted the resignation of our manager Steve Burr. We would like to thank Steve for all his hard work and passion during the last few months. He has worked tirelessly from the start , building a new team from scratch and we would like to wish him all the best in the future. Andy and Alex will continue running the team and will release a statement shortly.

A statement from Steve Burr: I have taken the decision to resign from Stafford Rangers. I would like to thank the Board of Directors for all their support during my short time at the club. It has been a tough year on a personal note. I would like to wish everyone connected with the club all the very best for the future. 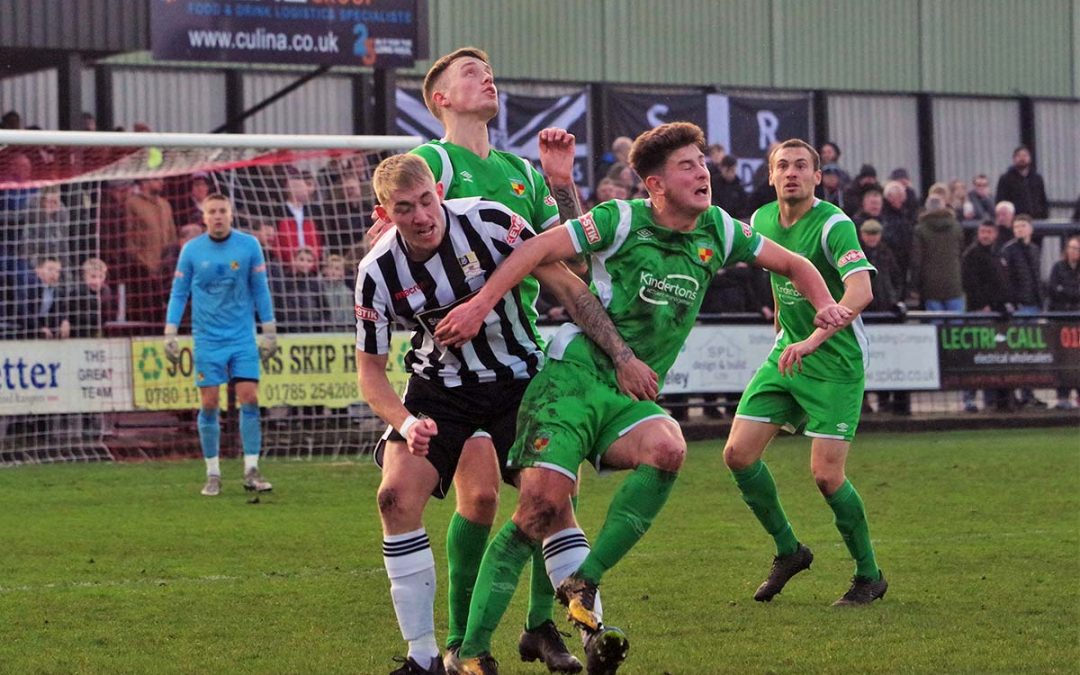 Stafford Rangers’ frustration’s continued with defeat at home to league leaders Nantwich Town. Rangers’ manager Steve Burr kept faith with the starting XI that lost at Matlock Town four days earlier, with new signings Peter Williams and keeper Adam Siviter taking their places on the bench. The first half hour produced few clear-cut chances. Rangers were playing the better football of the two sides, but it was the visitors Nantwich who were asking most of the questions from the respective keepers.

Joe Malkin headed just over inside 2 mins and had the ball in the back of the net again soon after, but Sean Cooke was flagged offside.
Stafford’s first look in came via a first time shot on the turn from Jack Sherratt following a Josh Green throw. Sykes-Kenworthy had to go low to his right to keep out Louis Barnes’ free kick after Luke Jones had fouled Cooke and it was the latter who fired Nantwich ahead on 32 mins with a shot from 20 yards out beat Sykes-Kenworthy’s despairing dive although Joe Mwasile had been allowed to get away with a foul on Andy Haworth in the build-up.

James Lawrie missed a good chance to increase the lead shooting high and wide when well placed. Rangers made him pay with a 39th minute equaliser courtesy of an own goal from Joel Stair whose attempt to intercept Jake Charles’s low centre only succeeded in diverting the ball past his own keeper. Right on the stroke of half time, Nantwich had another half chance but Sykes-Kenworthy held onto Cooke’s shot and the two sides went in all square after an evenly fought opening 45 mins.

The first opportunity of the second half fell to Rangers as Charles went clear after Jamie Morgan failed to cut out Sykes-Kenworthy’s long clearance but he put his shot wide of the far post. Joe Cuff also missed out soon after when Will Jaaskelainen saved with his feet. But where Rangers failed Nantwich didn’t and when Sykes-Kenworthy could only parry a long-range effort from Cooke, Malkin was first on scene to snap up the rebound to put the visitors back in front on 55 mins.

A goal line clearance from Morgan prevented Rangers from getting back on level terms soon after then sub Izak Reid messed up at the back post from Cuff’s ball across the face of the Nantwich goal. The home side were given another lesson in finishing as Malkin put Nantwich 3-1 ahead on 72 mins with a simple header from Mwasile’s cross to end a good move involving four players. Any hopes of a Rangers’ come back were well and truly put to bed with 10 minutes remaining when Tobias Mullarkey headed in Cooke’s corner at the back post.