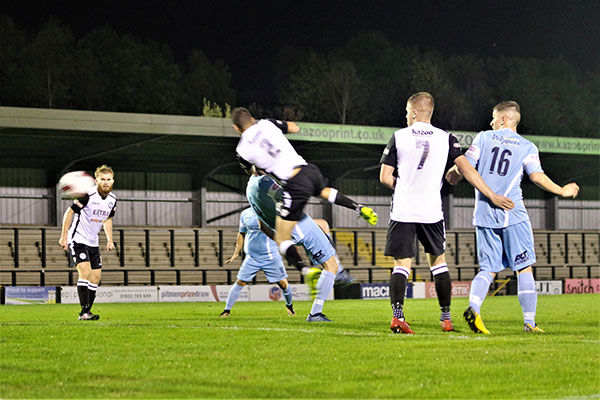 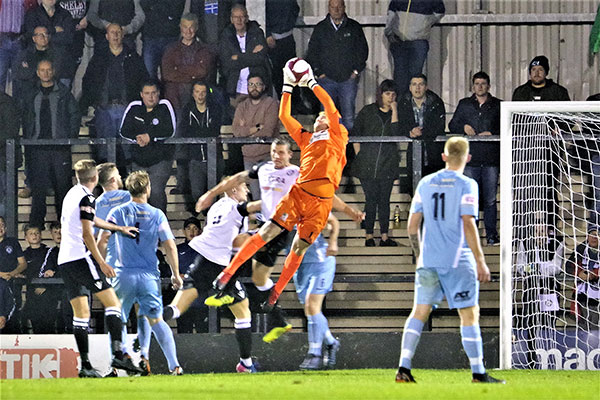 Rangers made it two wins out of two with victory over their arch rivals Hednesford but it came at a cost as Jack Sherratt was sent off with ten minutes remaining.

Luke Jones was back in the starting line up after his one match suspension with Tom Marshall dropping to the bench. There was also a recall for Louis Briscoe in place of Theo Bailey-Jones.

For the two former Boro players in the Hednesford squad – Josh Craddock and Sam Griffiths – there was only a place on the bench where they were to stay for the duration of the match.

The game started at a high tempo with Rangers doing most of the early pressing although they couldn’t manage to create a single effort on goal in the opening stages.

The home side also struggled to find a way through. That was until Boro right back Lewis Banks got caught in possession midway inside the Stafford half. The ball was played out to Nathan Fox on the left wing and his cross was superbly converted on the volley by Mike Howard to give the Pitmen a 20th minute lead.

Still Rangers couldn’t create anything to trouble Hednesford keeper Daniel Eccles in open play but, when Kyle Perry was tripped right on the edge of the area, up stepped Izak Reid to fire home the free kick to level for Rangers on the 36th minute. A great moment for Rangers but one that the Hednesford defence and keeper should have dealt with.

Six minutes later Perry was brought down again – this time some 35 yards out by Jed Davies who received the games’ first caution. The distance did not matter to Louis Briscoe who drilled in a low shot which once again found its way past defence and keeper and Rangers were in front.

Briscoe tried his luck again from a similar distance in stoppage time but this time Eccles got behind it safely.
Hednesford had a chance to level right on the stroke of half time when Davies’ free kick picked out Dan Cockerline at the back post but Adam Whitehouse made the vital block to keep Rangers in front.

The second half was more open and Kyle Perry looked to have extended Rangers’ lead on 50 mins when he headed in Reid’s cross but the referee spotted an offence that few others could and ruled the goal out.

Soon after, Davies drilled in a low centre that Whitehouse needed two attempts to grab hold of with Cockerline and Reece King waiting to pounce.

In another Hednesford attack, Cockerline went to ground in an unsuccessful search of a penalty. Rangers broke away but Bailey-Jones could only find the side netting. Referee Walker then returned to Cockerline to issue a caution for his fruitless efforts to deceive.

Harry Benns forced a save from Eccles as the two sides exchanged counter-attacks but it was another dead ball situation that produced Rangers’ third goal of the night on 72 mins.

Reid drilled in a low free kick from near the left touchline which Sherratt hooked home for his first goal of the season.

Another Sherratt shot was saved low to his left by Eccles while, at the other end, Whitehouse had to tip over Stefan Galinski’s looping header from a Davies free kick.

The only down side to Rangers’ night came on 81 mins when Sherratt was shown his second yellow for a harmless looking challenge on Galinski but, though Hednesford tried to press home their one man advantage, they failed to pose much of a threat to Whitehouse in the Rangers goal.