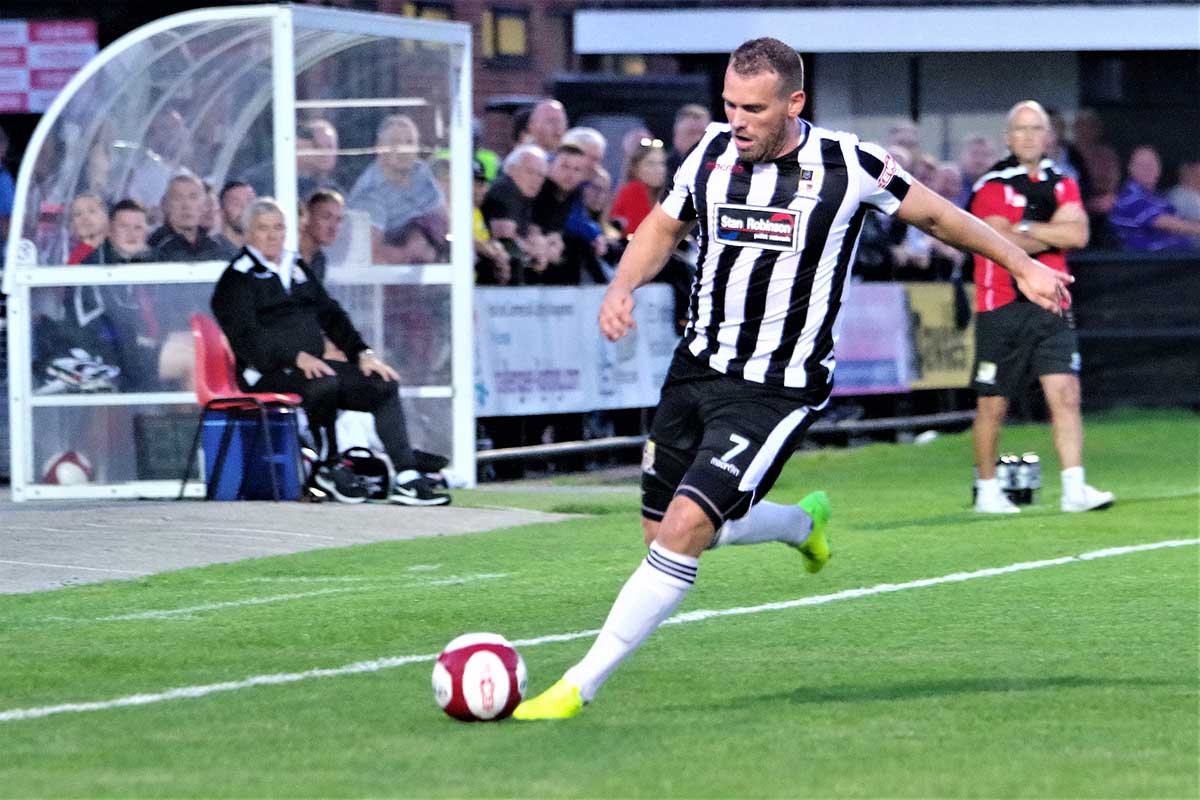 Rangers got their first point on the board, under Manager Steve Burr, with a hard fought and improved performance after the opening day defeat at Workington. The opening stages were largely owned by Grantham as they imposed themselves more effectively. In the second minute, Whitehouse fumbled a cross under pressure but the visitors failed to capitalise, then on five minutes they won the first corner of the game and Batchelor rose to head towards goal but his effort was saved and Ward’s follow up was blocked for another corner.
Rangers then managed to force some pressure as a dangerous cross from Briscoe was cleared, before Abadki won the first corner for Boro. Luke Jones rose to head towards goal but Bailey-Jones was in line and it struck his team mate and bounced away. Boro then pushed forward and Louis Jones came through a crowd to punch clear, but the ball dropped to Sherratt and his effort was volleyed wide. This was all part of a decent spell of pressure for Boro as they stemmed that early flow of pressure from the visitors. Another Grantham corner came and Penfold this time hit his own player on the six yard line and Boro cleared the danger. Rangers closed the half looking stronger as Bailey-Jones fired through a crowd and wide of the far post, before Abadaki went on another run and Briscoe fired his lay off high and wide.
The second half was a lively affair with both teams going for it. Abadki collected Rangers’ only booking with a late trip, just after half time. Grantham broke soon after this and Luto fired an effort over the bar, before Boro put together a great move switching play with pace as Bailey-Jones moved in and found Briscoe, whose shot was saved well by Jones. Abadaki was then replaced by Joe Cuff and this spiced up some of Rangers’ play as he got amongst things from the off. He attacked down the lift and a challenge brought Barrows Grantham’s first caution. After the free kick was cleared, Bailey-Jones attacked from the right and his shot was headed from under the bar by Barrows.
Cuff attacked from the left and his effort was blocked but appeals for a penalty were waved away by Mr Tallis. On sixty one minutes Rangers then took the lead as Coulson took a throw from the left and Briscoe let the ball run across the box before turning to find the corner of the net via the despairing dive of Jones. This lifted Rangers as they continued to press with no little confidence. As they pressed, Grantham struck five minutes later, as a long through ball was played down the right channel and Marshall just failed to get proper contact on his header and the ball ran kindly for Watters who ran on to apply a cool finish past the advancing Whitehouse.
Both sides then continued to press for openings, as Cuff forced another save from Jones and a further effort blocked. Grantham were not to settle for appoint as they also pushed forward and Watters again threatened on eighty none minutes but his effort rolled across goal and, thankfully for Rangers, past the far post.
Att 562