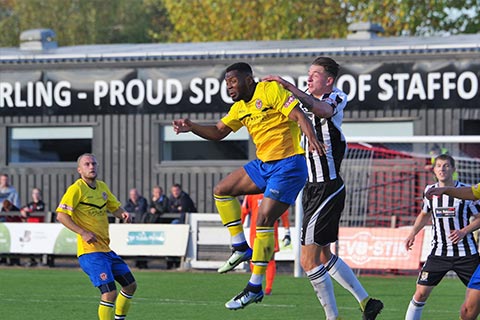 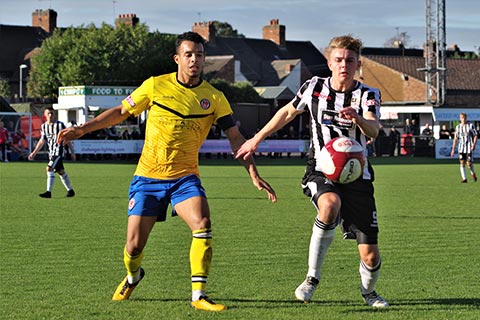 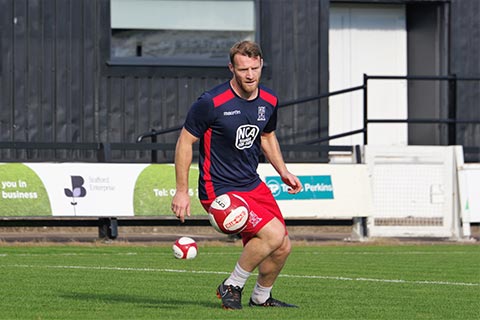 Stafford Rangers suffered their third successive 3-1 home defeat, but this was a game that they should have got something out of as they did enough to win – except score more goals than their opponents. Rangers fielded new signings Ethan Stanton (from Stoke City) and Daniel Burns (from Nuneaton Borough) while Jake Charles was given his first start.

But, the Boro had an early set back when creative midfielder Louis Briscoe hobbled out of the game in the 8th minute the injury coming when he mis-kicked a pass from Tom Thorley.  The first half was a disappointing affair with neither side showing any real quality as they struggled to ring the all down on a bobbly pitch.

Hyde were marginally the more creative of the two sides. Defender John McCombe was twice involved inside the Stafford area but the visitors were unable to take advantage on either occasion. Then Hyde had penalty appeals turned down when Kyle Brownhill’s centre bounced up onto the hand of the unwitting James Askey after being missed by Connor Simpson.

Stafford’s best chance of the opening 30 mins came via the individual work of Harry Benns who did well to win possession but failed to match his approach play and a tame shot bobbled through to Hyde keeper Peter Crook.

In the best move of the half, former Stafford midfielder Osebi Abadaki – on as a sub for Kyle Harrison – sent in a decent right-wing cross for Tom Pratt to lay off to Janni Lipka but his shot was deflected wide. Two minutes later, Briscoe’s replacement Joe Cuff fired into the side netting from a corner when he had time and space inside the Hyde area.

Stafford were a better side after the break and put Hyde under lengthy periods of pressure. Tom Thorley, Benns and Lewis Banks all chances to open the scoring but were off target. It was approaching the hour mark before Hyde got a look in, but Tom Pratt shot wide from the edge of the area following a free kick on the right.

Rangers continued to look the most threatening and Sam Coulson worked himself some space but saw his shot deflected through to Crook then Stafford had strong penalty appeals turned down when Ethan Stanton went to ground.

James Askey shot straight at Crook after good approach play from Benns and Cuff and Rangers’ failure to take their chances was to prove costly as, against the run of play, Hyde went ahead on 72 mins. Moments earlier, Abadaki saw a good strike deflected onto the post and out for a corner.

From Lipka’s flag kick, Abadaki hit the bar from close range but McCombe was on hand to nod the ball home from under the bar to put Hyde ahead. Rangers could have been level within two minutes as Theo Bailey-Jones forced a save from Crook – another good opportunity not taken – and, once again, Rangers were made to pay as Connor Simpson made it 2-0 on 81 mins clipping the ball past Whitehouse from the edge of the area.

Daniel Burns pulled one back for Rangers on 85 mins when he hooked the ball in from close range after Bailey-Jones had beaten Crook to Charles’ left-wing cross. James Askey then missed a great chance to level for Stafford when he fired straight at Crook but Hyde put the game to bed with a counter attack three minutes into added time. Tom Pratt exchanged passes with Simpson then fired past Adam Whitehouse to make it 3-1.