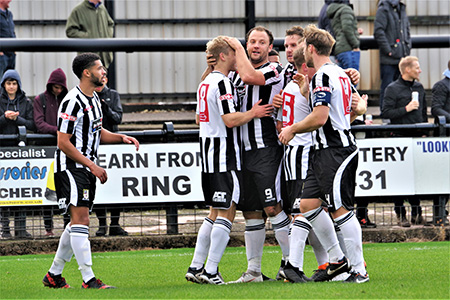 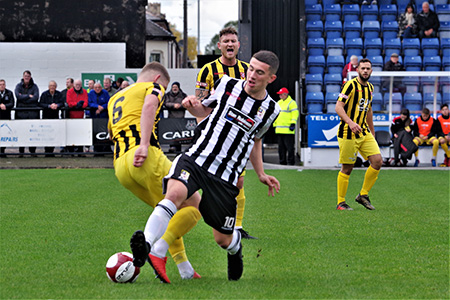 Stafford Rangers suffered their third consecutive defeat and lost their unbeaten home record, but it was another afternoon where they could have had something from the game if a little more luck had gone their way.
Following Tuesday’s defeat at Marine Rangers fielded two new faces in the starting line up with Morgan Bacon replacing Adam Whitehouse in goal while Morgan James came in to midfield. Jack Sherratt and Sam Coulson were on the bench.

In an evenly matched game, Stafford started the better of the two sides and went close when Theo Bailey-Jones struck the post from around 15 yards out with Scarborough keeper Thomas Taylor just watching.

A couple of minutes later, Harry Benns dispossessed Bailey Gooda allowing Louis Briscoe to advance but he chose to shoot from distance and the ball went tamely wide.

Benns himself went wide when well-placed but both sides then found chances increasingly hard to come by and the half was well past the midway point before the visitors had a shot on goal and on that occasion Luke Dean saw his effort deflected wide.
Up to then, Stafford had looked the better side and it was against the run of play on 30 mins that Scarborough went ahead. A goal kick from Taylor was eventually hooked forward by Michael Coulson and Wayne Brooksby found space on the edge of the box. His shot took a slight deflection, but it was enough to send the ball past Bacon via his left-hand post.

Gooda made a goal line clearance to deny Bailey-Jones with Kyle Perry waiting to pounce but Stafford levelled on 38 mins when Briscoe’s corner was headed in by Tom Thorley. The corner came after Taylor had had to throw himself to his right to push away a Briscoe free kick.

But it was short lived parity and Scarborough were back in front on 41 mins when James Walshaw took advantage after Morgan James had failed to clear the lines. The two sides traded chances early in the second half, but it was Scarborough who were to add to their score on 54 mins when Kevin Burgess headed in at the back post from a Coulson corner.

Bailey-Jones went close to reducing the arrears after being let in by an error from Gooda, but he struck the Scarborough post for the second time in the afternoon while, at the other end, Coulson saw his shot tipped onto the bar by Bacon then Banks denied Walshaw with a timely tackle. Rangers kept working but a lack of creativity and firepower meant there was no way back. The nearest they came to scoring was when Briscoe forced a save from Taylor in added time.