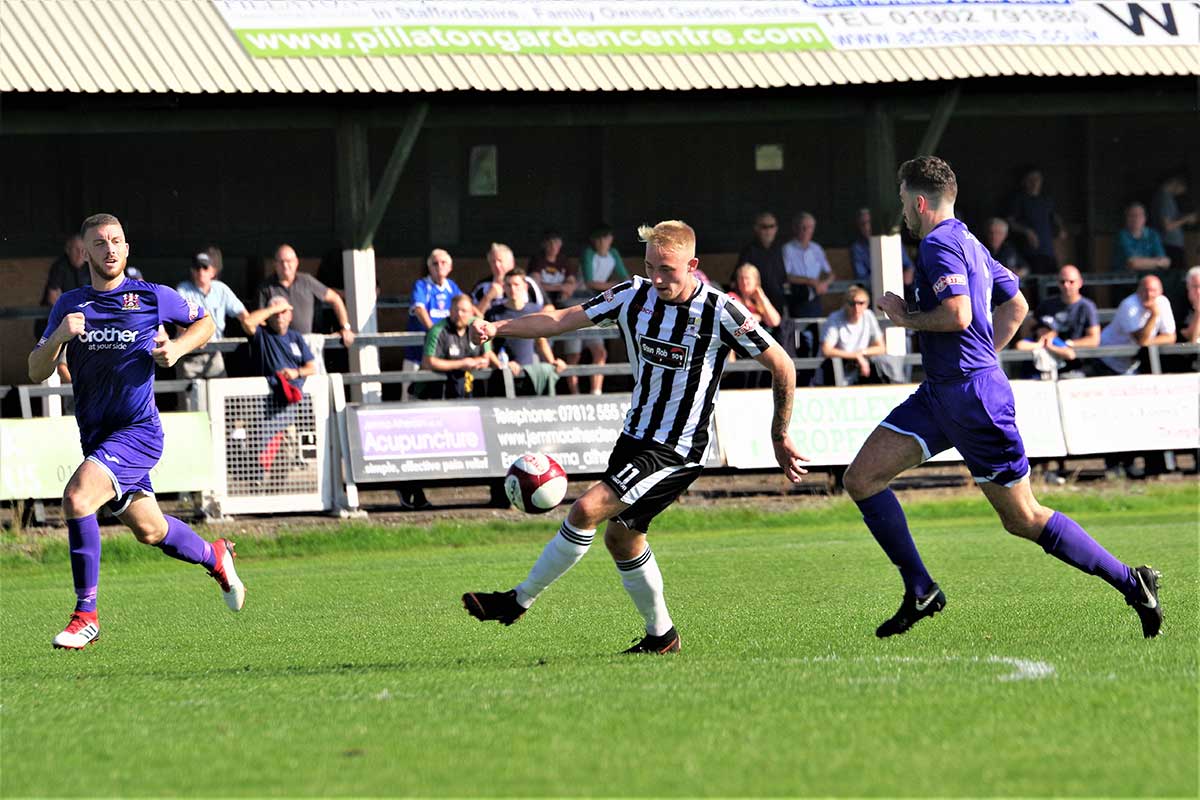 Stafford Rangers picked up their first win of the season as Rangers beat Celtic in the NPL’s own version of the Old Firm derby. While Rangers went in to the game without a win to their name, Stalybridge were unbeaten and the visitors showed intent of extending their run when they attacked from the kick off but Scott Bakkor fired over from the edge of the area.

Stafford soon settled but were largely restricted to shots from outside of the penalty area. Theo Bailey-Jones and Kyle Perry both tried their luck but neither was able trouble Jake Turner.

Jake Sherratt placed a powerless header straight at Turner following Tom Thorley’s free kick then Thorley himself had a shot blocked before Perry was denied as Scott Wilson headed of the line.

The Celtic keeper had to be more alert to keep out a decent strike from Joe Cuff and dived to his left to push the ball out for a corner.
Soon after, it was Turner’s opposite number Adam Whitehouse who had to save his team after John Mardsen got behind the defence following an error in the Rangers’ midfield. From the resultant corner, Danny Brady headed against the post then Ross Dent put the rebound over.

Stalybridge were first to show after the break as Bakkor got on the end of a low centre from Liam Tongue but Whitehouse was safely behind it. Shortly after, Matthew Wolfenden fired over after Whitehouse was caught in two minds over how to deal with Glenn Rule’s crossfield ball.

Rangers responded as Izak Reid headed straight at Turner but danger remained at the other end and Neil Kengni should have done better when he blazed over from a good position following Marsden’s lay off. Louis Briscoe replaced Theo Bailey-Jones and his first contribution was to drive in a corner that Sam Coulson’s met with the sweetest of volleys looking a certain goal until it was, somehow, headed off the line by Michael Clarke.

But the opening goal wasn’t long in coming and it was a great strike from Cuff on 66 mins that put Stafford ahead. The winger got behind the defence to latch on to a long kick from Whitehouse, beat his man and then Turner from just inside the area.

A spectacular overhead volley from Perry went just wide but Rangers made certain of the win with 7 minutes remaining when Reid smashed home a penalty after he himself had been tripped.