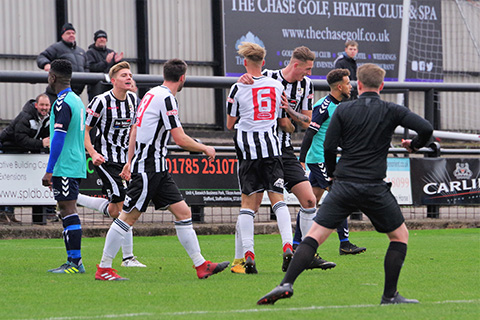 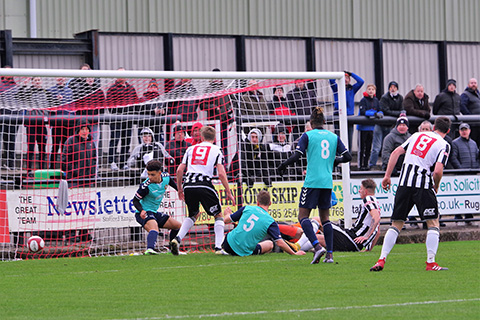 Stafford Rangers put their league struggles behind them to beat local rivals Rushall Olympic in the FA Trophy, but they had to play almost the entire second half with 10 men after defender Dan Burns was sent off for pulling back Rushall forward Ben Lund.

The trio of Luke Jones, Izak Reid and Jack Sherratt were back in the starting line-up for Rangers with Harry Benns dropping to the bench. Injured duo Louis Briscoe and Kyle Perry were missing altogether. Rangers had looked the most promising in a fairly quiet start and Jack Sherratt sent the first message of intent, but his shot failed to trouble Joe Slinn.

Lewis Banks at least forced a save from Slinn after receiving a good ball from Reid, but it was Rushall who opened the scoring after 10 minutes. Lund timed his run to beat the offside trap and gather Ashley Sammons’ ball over the top and advanced to slot past Adam Whitehouse. But the lead was short lived, and Rangers were back on level terms on 16 minutes. A right-wing corner from Theo Bailey-Jones was struck goalward by both Jones and Jake Charles. Slinn made the initial save with his feet but Burns was on hand to add the finishing touch.

Seven minutes later Rangers were in front as a low centre from Bailey-Jones was swept in by Ethan Stanton – the shot taking a deflection off a Rushall defender to beat Slinn. Stafford were now in confident mood, but they were unable to make any further additions to the score while, at the other end, they had a scare when Burns’ back pass fell short and Whitehouse had to race of his line to clear.
Rangers’ chances received a setback just three minutes into the second half when Burns misjudged a header then pulled back Lund, who would have been through on goal, and was sent off.

There could be no complaints but, fortunately, Whitehouse saved any further punishment with a good save from Sammons’ free kick.
Whitehouse came to his side’s rescue again on the hour with a good save from Daniel Waldron’s close-range header then Sam Whittall headed over. Another Whitehouse save – this time from Sammons – kept Rangers in front as Rushall put the pressure on.
The Pics threw on big guns Richard Brodie and Justin Richards with around 20 minutes to go and with the final kick of the game Brodie missed an absolute sitter when he somehow put the ball over from less than a yard out.

It was an encouraging display from Rangers who deserved to progress. Jake Charles worked hard up front, particularly in the second half when Rangers were down to 10 men, while Tom Thorley was the master of midfield.