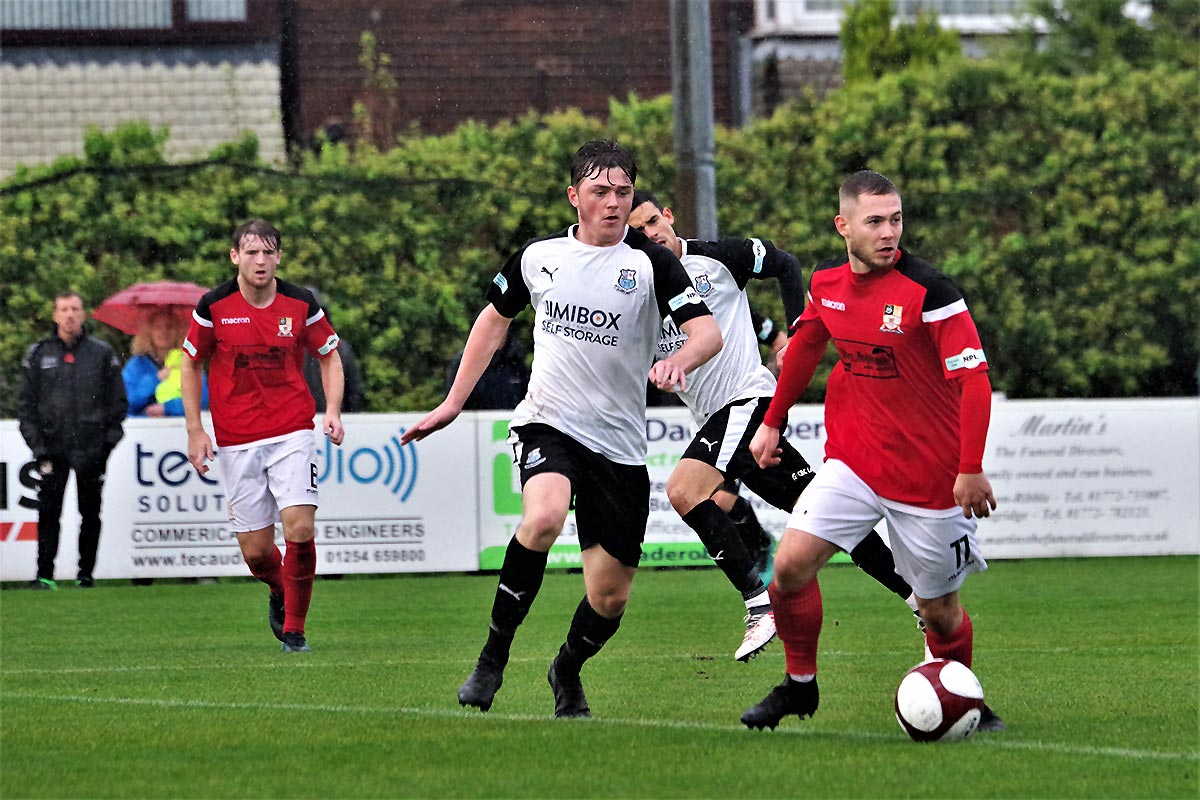 Stafford Rangers’ struggles continued as they lost their bottom of the table clash at Bamber Bridge and dropped to the basement spot and their injury woes also continued with Josh Burns and Robert Thompson-Brown both picking up knocks that brought a premature end to their afternoon. Rangers gave a debut to midfielder Will McGuffie after he joined the club on loan from Wigan Athletic but there was no return for Luke Jones while Jack Sherratt was also missing with injury picked up in last week’s defeat at Sutton Coldfield. Bamber Bridge were on the offensive from the off and Kieran Charnock headed wide inside two minutes.
Ryan White’s probing run created an opening for the home side but neither Alistair Waddecar nor James Dean was able to finish off. It took Rangers to the 17th minute to create a worthwhile opportunity. Joe Berks sent in a free kick from the left, but Brad Grayson’s glancing header went just a few inches wide of the far post. Lewis King was called into action in the 28th minute when he turned away Waddecar’s well struck drive. A few minutes later, King gathered a Charnock header with Dean waiting to move in. Josh Burns did well to get in at the back post for Stafford following Jed Davies’ free kick, but the angle was too tight to do any damage and Lloyd Rigby saved at the foot of the post. Rangers started brightly in the second half. Berks’ free kick was tipped over by Rigby and, from the resultant corner, McGuffie volleyed wide at the back post. Shortly after, McGuffie went on a counter run which won the Boro a corner from which Dan Burns headed wide when well placed. But, with Rangers looking to establish themselves in the game, they received a setback on the hour mark when referee John Mulligan decided that Dan Burns had handled Dean’s header and Waddecar put Bamber Bridge ahead from the spot. Louis Hayes wasted a chance to double the lead when he fired over from 18 yards out while Dean clipped his effort over after he had beaten the offside trap. In between, Matt Hill turned one over for Stafford. In the fourth minute of added time, Waddecar made certain of the points for Bamber Bridge with a crisp finish from the edge of the area. Referee: John Mulligan Cautions: Thomson, White (Bamber Bridge), Hill, D Burns (Stafford)
Bamber Bridge: 1 Lloyd Rigby, 2 Matthew Thomson, 3 Adam Sumner, 4 Matt Lawlor, 5 Kieran Charnock, 6 Daniel Wisdom, 7 Alistair Waddecar, 8 Joseph Booth, 9 James Dean, 10 Louis Hayes (17 Danny Forbes 80m), 11 Ryan White (15 Matt Dudley 86m). Unused Subs 12 Phil Doughty, 14 Callum Spooner, 16 Gary Pett
Stafford Rangers: 1 Lewis King, 2 Josh Burns (15 Josh Green 71m), 3 Matt Hill, 4 Paul Bignot, 5 Dan Burns, 6 Alex-Ray Harvey, 7 Joe Berks (14 Louis Briscoe 84), 8 Will McGuffie, 9 Bradley Grayson, 10 Robert Thompson-Brown (12 Evan Garnett 51m), 11 Jed Davies. Unused Subs: 16 Shakeel Jones-Griffiths, 17 Ethan Stubbs