Boldmere St Michaels arrive at Stafford Rangers for this Walsall Senior Cup quarter finals as the holders. They are looking to progress to another final to add to the times they won the cup in 1987, 2006, 2007 and 2008. While we lie bottom of the Northern Premier League (step 3) Boldmere lie 8th in the Midland Premier League (step 5). The fixture has some added spice in that In September, while bottom of the league, Boldmere appointed former Rangers manager Neil Kitching as their manager and with the addition of some ex Rangers players he has seen them rise up the table.

The football club was founded in 1883 as a Youth football team attached to St Michaels, the local church Bible class. After progressing through several minor leagues, the club entered the Birmingham & District Amateur League. However, a split in the club occurred and a team called Boldmere was formed to play elsewhere. Several seasons later the two teams reformed in 1925. Either side of the Second World War, Boldmere was amongst the leading amateur clubs in the country, such that In Easter 1939 Boldmere ventured into Europe to play in the Verviers Tournament in Belgium. The Mikes triumphed and returned with the trophy to be greeted by the Lord Mayor at Birmingham New Street Station.

As semi-professional status came more into being, Boldmere’ s desire to remain as an amateur club saw them struggle to compete and the playing fortunes of the club went into decline. In 1963 Boldmere moved to the Worcestershire Combination which later became the Midland Football Combination. The 1994-95 season saw Boldmere become one of the founder members of the Midland Football Alliance

In June 1971 a fire devastated the club and almost put them out of business however many changes have taken place regarding upgrading the facilities and the building of a superb clubhouse. Other additions have been the erection of floodlights and the building of new dressing rooms and Boardroom facilities to raise the club up to Southern League standards, a level to which Boldmere aspire to play at. 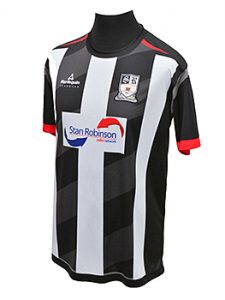