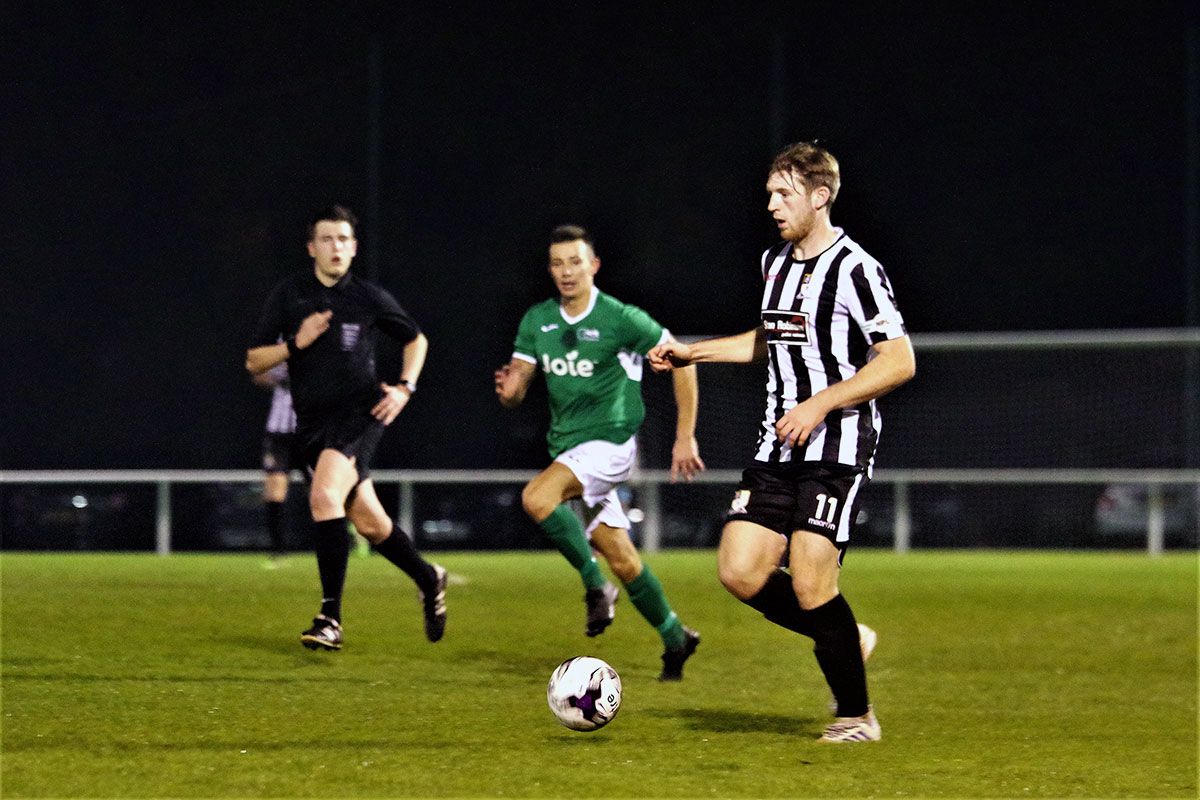 Stafford Rangers overcame a potential banana skin to see off neighbours Brocton in their Walsall Senior Cup tie at Silkmore Lane. Rangers resisted the temptation to blood some of their young Academy players and fielded a strong starting XI with, perhaps, the key surprise being the return of midfielder Peter Williams who featured regularly in the second half of last season and in preparations for the current campaign. In front of a good gate of 217, the opening 45 mins were keenly contested and there wasn’t too much between the two sides although Rangers were the more dominant and held a slender lead at the break.
Evan Garnett, looking for an early confidence booster, had an early shot on goal which went just wide and was then involved in another opportunity that ended with Badgers’ keeper Henry Smith just beating Will McGuffie to the ball. Josh Green took one for the team when he brought down Dan Lomas, denying the Brocton man a run in on goal. Soon after, Lomas had his chance from 30 yards but sent his shot well off target. At the other end, Joe Berks shot from distance, but Smith was untroubled. Jack Weldon did well in the inside right channel and managed to get in a shot that Lewis King saved low to his right. Smith made a fine save as he turned over Berks’ curler which was heading for the top corner, but it was the young midfielder who gave Rangers the lead on 40 mins when he converted Garnett’s square ball from close range. Brocton could have levelled before the break, but King’s fingertips kept out Jack Weldon’s header. Brad Grayson made it 2-0 on 50 minutes profiting from an error by Smith who let Garnett’s drive slip through his grasp. The ball ricocheted up on to the bar and Grayson was first in. Smith went some way to making amends for his blunder with a decent save to keep out Louis Briscoe’s free kick. Brocton needed to take their chances if they were going to get back into it but Christian Blanchette sent a curling effort high and wide while a poor touch from Jamie Weldon saw another opportunity go begging. Instead, it was Rangers who made the game safe on 64 minutes. McGuffie made a strong run down the left then picked out Berks with a short pass. Berks finished the move with an excellent shot beyond the reach of the Brocton keeper. Garnett added the fourth in style on 80 minutes, rounding the keeper after a solo run. Connor Haddaway and Jack Weldon both had chances for Brocton late on, but Rangers deservedly held on to their clean sheet to book a home tie against RAF Mens Representative Team in round 2. Referee: Tom Heath Cautions: Lomas (Brocton), Green (Stafford)
Brocton: 1 Henry Smith, 2 Adam Weldon, 3 Malaki Norford, 4 Cam Howkins, 5 Jamie Weldon, 6 Jack Partridge (12 Ben Douglas 47m), 7 Jack Weldon, 8 Connor Haddaway, 9 Kenny Devoir (14 Reinaldo Forbes 62m), 10 Dan Lomas, 11 Christian Blanchette (16 Cameron Osborne 71m). Unused Subs 15 Ben Wood, 17 Matt Tolley
Stafford Rangers: 1 Lewis King, 2 Josh Green, 3 Matt Hill (15 Jed Davies 71m), 4 Paul Bignot, 5 Dan Burns, 6 Peter Williams, 7 Joe Berks (17 Ethan Stubbs 65m), 8 Louis Briscoe (14 Shakeel Jones-Griffiths 59m), 9 Bradley Grayson, 10 Evan Garnett, 11 Will McGuffie Unused Subs: 12 Jack Sherratt, 16 Alex Ray-Harvey