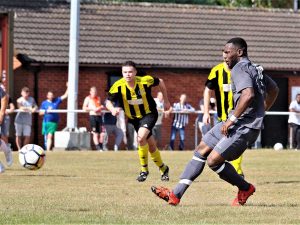 Rangers opened their pre season campaign with the short trip to Heath Hayes. The first 45 minutes saw new Manager Steve Burr assembling a mix of confirmed signings and trialists no less than six trialists coming into the starting eleven. Rangers were, as expected, the first to show, looking strong in midfield and the front two being just 16 and 17 years old, caused numerous problems with their pace and ability.

With lots of pressure the first serious effort just cleared the bar in the 10th minute, and more attacks followed. In the 30th minute a long ball was headed in an attempted clearance but gather and controlled by trialist(7) before he rolled it back and trialist(4) fired into the bottom corner to give Rangers a deserved lead. The pressure continued to be piled on with the hosts only occasionally breaking from their half to relieve the pressure, without seriously threatening Adam Whitehouse.

On 43 minutes another awkward ball into the box was headed up and as it dropped James Askey made no mistake, volleying in for 2-0 and a comfortable looking half time lead.

The second half brought numerous changes, with a more familiar line up, as more confirmed signings joined the fray, while a few familiar faces put in their own “trial” performances, having not yet been confirmed as signed. The hosts were now even more pressure and the width used really opened them up, repeatedly as the heat also took its toll.

On 48 minutes a corner was converted by Luke Jones to make it 3-0 as Rangers started as they left off. More pressure and on 60 minutes good work on the right and Abadaki pulled the ball back for Kyle Perry to fire into the corner for a 4-0 lead. Abadaki was then floored and he got up to make it 5-0 on 73 minutes. It was now a question of how many? Rangers continued to press and Abadaki was quick to react and fire into the roof of the net from 18 yards for his double.

The rout was completed on 90 minutes with Briscoe crossing for Jones to head his second and Rangers’ seventh.
To round things up Steve Burr said “I was delighted with the performance, particularly considering we started with a front two who were 16 & 17 years old! I was also pleased with how it came together, playing in such heat in our first game, and was pleasantly surprised with how the new lads have come in and played so well. We now take the next step up by going to Stafford Town on Tuesday where we will try and continue the good work.

Many Thanks to Heath Hayes for the hastily arranged fixture and thanks to all the fans who travelled to watch us.”