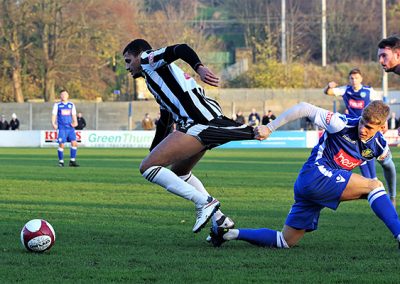 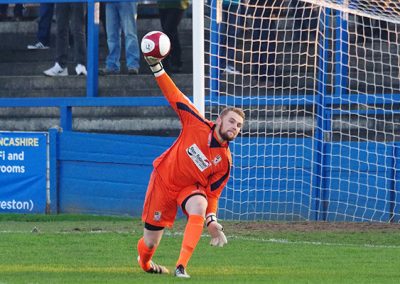 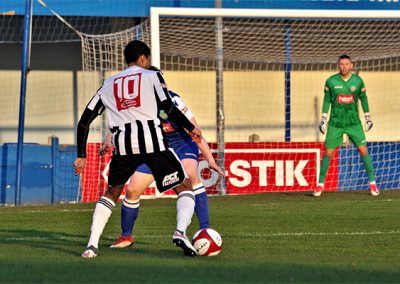 Stafford Rangers produced a solid display to pick up a point away to rapidly improving Lancaster City and they had to do it with 10 men after midfielder Andy Haworth was sent off shortly before half time.

After last week’s dismal exit from the FA Trophy, James Askey was recalled to the left back position while Haworth – cup tied for the Basford game – came in for Izak Reid. Apart from the incident that led to Haworth’s dismissal, there was little to talk about in the opening half. The two teams slogged away but found the respective opposition defences tough to break down.

What chances did happen came Rangers’ way. The best fell to Jack Sherratt on 28 mins when he was left unmarked from Theo Bailey-Jones’ corner, but his header lacked power and direction. Earlier, Haworth had got on the end of a ball down the inside right channel from Lewis Banks and flicked it past Jack Sims but also across the face of goal and wide of the far post.

Lancaster’s best chance came a couple of minutes after Sherratt’s miss but Charlie Russell fired high over from the edge of the area. Haworth’s dismissal in the 40th minute came after an off the ball clash with Simon Wills. The Lancaster born player took a harmless but petulant kick out at Wills, but the referee failed to spot the Lancaster captain’s provocative elbow.

Lancaster had a great chance on the hour when Russell flicked on Ryan Winder’s free kick and Andrai Jones had to head off the line.
Tom Kilifon sent another header across the face of the Stafford goal then put Winder through, but he hit the side netting after being forced wide by Adam Whitehouse.

Stafford were still a threat and Luke Jones headed wide at the back post from Josh Green’s free kick although it was an over hit back pass from Craig Stanley that gave Lancaster their greatest concern.  The home side pressed late on and Whitehouse saved well from Kilifin to ensure his side took a deserved share of the spoils.