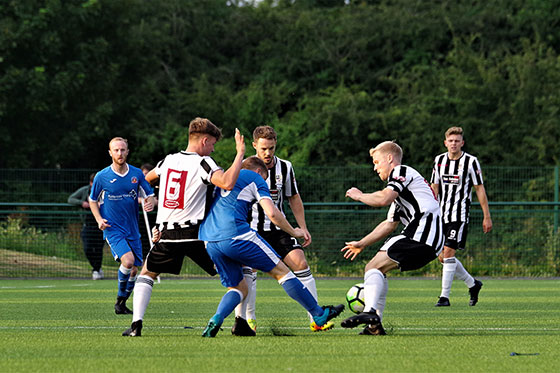 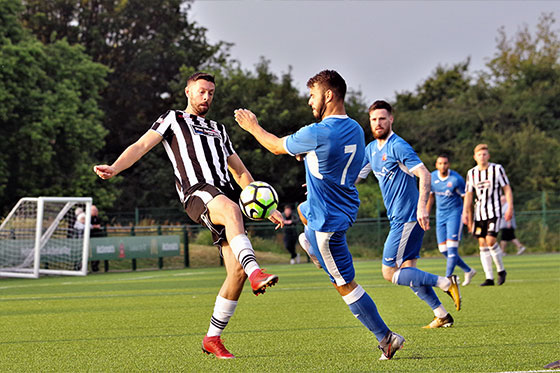 Rangers again showed no mercy as they made it two wins, sixteen scored and none conceded in their first two friendlies. Lichfield City were anticipated to be a tougher test than Stafford Town – They were but were still no match for some power play and some clinical finishing by ‘Boro.

The writing was on the wall, as Andy Haworth curled in an excellent opener as early as the second minute from the corner of the box. This was then followed Jake Charles latching onto a through ball, just two minutes later, and he applied a cool finish finding the bottom corner. Lichfield slowly started to find their feet, with brief spells of territorial possession and a few high balls into the Rangers box, so Lewis King was on his toes to clear danger but was not seriously threatened by any shots. Rangers then reasserted themselves on the game with numerous forays forward. An excellent four man move saw Louis Biscoe just fail to add the finishing touch, before a run from Charles saw his effort flash across goal and then have an effort saved. A further break down the right saw Briscoe cut into the box and apply a great finish for Rangers’ third goal on thirty-two minutes. Before the break Briscoe could have had his hat trick, but one effort went just wide while he then intercepted a back pass, but the keeper got back well to save, and Rangers went in three-nil up.
Alex Meechan and Andy Fearn rang the changes as eight players were swapped at the break. This brought a more youthful look with a three-pronged attack of Declan Arber, Lucas Burnett and Declan Arber – all from the youth set-up – were set free. While these youngsters are still developing and have a lot to learn, the unpredictability of the play often frustrated the Lichfield back line. In the first minute of the half, Burnett draw a good save with a snapshot. In the fiftieth minute, while the defence was covering the new threats, Bailey-Jones cut in from the left to find the top corner and a four-nil lead. Lichfield then tried to swing the game as they attempted to apply their own pressure. King pulled off a save from a twenty-five-yard free kick as they enjoyed some decent possession. Rangers hit back after making changes, as Thorley made way for trialist and King made room for another, in goal. Dixon latched onto a through ball but struck the keeper. City switched play as Luke Jones on keeper made a double stop to keep Rangers clean sheet. Peter Williams increased the lead as the ball was squared back and he fired home from twelve yards, making it five-nil. Dixon and Burnett went close again before, on the eightieth minute, Arber intercepted a poor back pass and made it six-nil, rolling into the bottom corner. With a few minutes on the clock, trialist evaded all challenges but was denied by a good save, before it was all wrapped up at seven-nil, as Dixon broke into the box to square for Bailey-Jones to round off another rout.