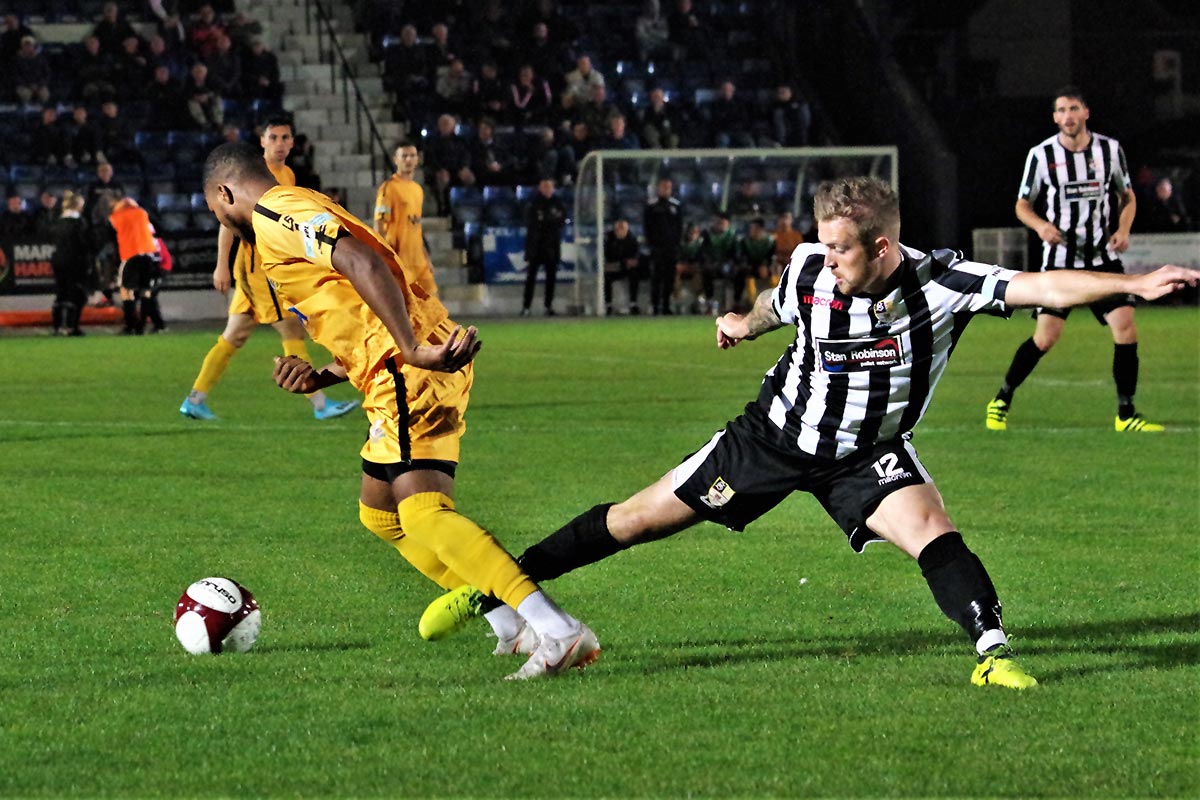 Stafford Rangers picked up a welcome point, but their goal drought continues as they were held to a goal-less draw in an entertaining night at Marston Road. It was another game of what might have been as chances came and went but the management duo of Andy Fearn and Alex Meechan were pleased with the reaction after Saturday's 4-0 defeat at Hyde. The result takes Rangers off the bottom of the table but leaves them with just two goals from their opening six games. Rangers were without four regulars with Jake Charles, Tom Thorley, Theo Bailey-Jones and Paul Bignot all missing. In came Josh Burns - younger brother of central defender Danny - at right back for his first action since joining the club in the summer while Sam Coulson replaced Josh Green in centre midfield and Andy Haworth taking Bailey-Jones’ place wide right.
In a lively opening, both sides went in search of an early goal, but it was the visitors who produced the first shot of the night, but Matt Thornhill’s shot lacked power and direction. A couple of minutes later and it was Rangers’ turn with Haworth shooting wide after an exchange with Matt Hill on the left-hand side. Soon after Haworth’s miss, Jack Sherratt went close from around 25 yards - his shot just wide of Kieran Preston’s right hand post. Basford produced the only real shot on target midway through the first half when Jamie Walker outwitted Josh Burns but saw his shot beaten away by Lewis King. Stafford’s best effort came from lone striker Evan Garnett who did well to hold off Brad Gascoigne to get in a shot on the turn and the retreating Preston was grateful to see the ball land on the roof of the net. Stafford finished the half on top with a Briscoe free kick going just wide then Preston had to rush back to turn away another effort from Sherratt. Rangers kept up the pressure at the start of the second half with Garnett shooting high over then Sherratt heading over from Briscoe’s cross. Sherratt went close again from distance but Basford reminded the Boro of their threat when Walker got in behind the defence, but the angle was tight, and King saved comfortably low to his right. Rangers were then hit with a double blow with both Hill and Coulson, who had been outstanding up to this point, hobbling off with hamstring injuries. In between, Dan Burns made an excellent block to deny Kane Richards. But, Rangers responded well though their luck continued to deny them when Sherratt’s header was cleared off the line by Josh Law following Briscoe’s corner. Basford created a couple of chances of their own as Courey Grantham diverted Richards’ centre on to the roof of the net then Walker’s shot took a deflection wide. The final stages saw Basford come close twice more, but King denied them each time, firstly tipping over Walker’s in swinging free kick then diving bravely at the feet of Richards in the last action
Stafford Rangers: 1 Lewis King, 2 Josh Burns, 3 Matt Hill (12 Josh Green 58m), 4 Luke Jones, 5 Dan Burns, 6 Alex-Ray Harvey, 7 Andy Haworth, 8 Sam Coulson (14 Joe Berks 65m), 9 Evan Garnett, 10 Louis Briscoe (16 Jed Davies 90+3), 11 Jack Sherratt. Unused subs: 15 Max Dixon, 17 Soiyir Sanali
Basford United: 1 Kieran Preston, 2 Josh Law, 3 Dominic Roma, 4 Lewis Carr, 5 Brad Gascoigne, 6 Stefan Galinski, 7 Kane Richards, 8 Callum Chettle (12 Jack Thomas 83m), 9 Nathan Watson (15 Courey Grantham 67m), 10 Matt Thornhill, 11 Jamie Walker. Unused Subs: 14 James Reid, 16 James Carvell, 17 Dennell Stokes.