Stafford Rangers’ booked a place in the quarter finals of the Integro League Cup with a penalty shoot-out win over Marine.
The Boro are getting quite used to settling cup ties in this way – they knocked Market Drayton out in the 1st Round of this season’s competition and both of last season’s wins came from spot kicks. The first 45 minutes was a largely disappointing affair with neither keeper seeing too much of the action although Marine’s stopper Patrick Wharton was called upon to make a save from Josh Green inside 10 minutes when he went low to his right then he denied the Rangers midfielder again midway through the half when he blocked a powerful drive. 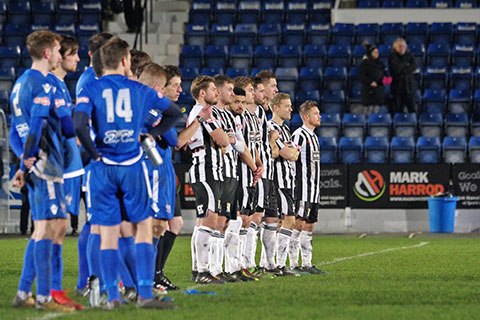 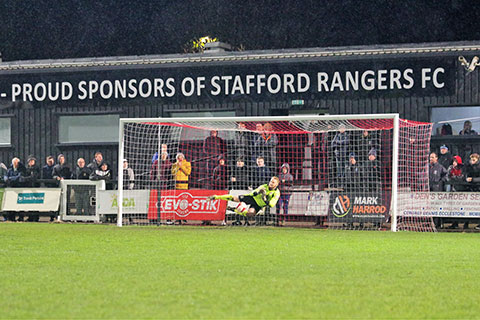 Rangers went close again soon after when an Izak Reid shot struck James Joyce on the line before being cleared.
In a fairly even contest, Marine had their share of possession but were guilty of some poor finishing in the crucial areas.
John Marsden fired over when well-placed while James Murray also produced a poor finish following a quick break from the visitors his shot going wide.

Marine’s best chance of the half fell to Oladapo Kayode shortly before the interval when his run was spotted by Charley Edge but Joe Cuff’s presence forced Kayode to run the ball for a goal kick. Rangers began the second half well and Wharton turned Tom Thorley’s shot over the bar. It was from the resulting corner that the home side opened the scoring in the 48th minute – captain Luke Jones climbing high to head home Green’s kick.

As Rangers looked to extend their advantage, Wharton denied Izak Reid after he was picked out by Green’s free kick. Dan Burns planted his header straight at the Marine keeper who then tipped over another goal bound header from Jones.
On another night, the Rangers skipper could have had a hat trick – he missed out again when Joyce headed off the line.
Cuff should have done better when he could only find the side netting after a quick ball out from Adam Whitehouse.

As the clock ticked on, Marine upped their search for an equaliser and it only needed a touch when sub Michael Elstone fired across the face of goal. With that let off behind them, it looked like Rangers would hold out, but Sam Tattum had other ideas and he headed home Steve Irwin’s corner with little more than a minute remaining. Tattum could – and maybe should – have won it for the visitors when he volleyed over with the last kick of the game but with the sides still level at full time it was down to penalties once more.

With Green, Thorley and Sam Coulson making no mistake it was advantage Rangers when Irwin hit the bar for Marine but then Wharton saved well from Jake Charles. But, when Whitehouse saved Danny Shaw’s kick, Jack Sherratt kept his nerve to put Rangers into the last eight.