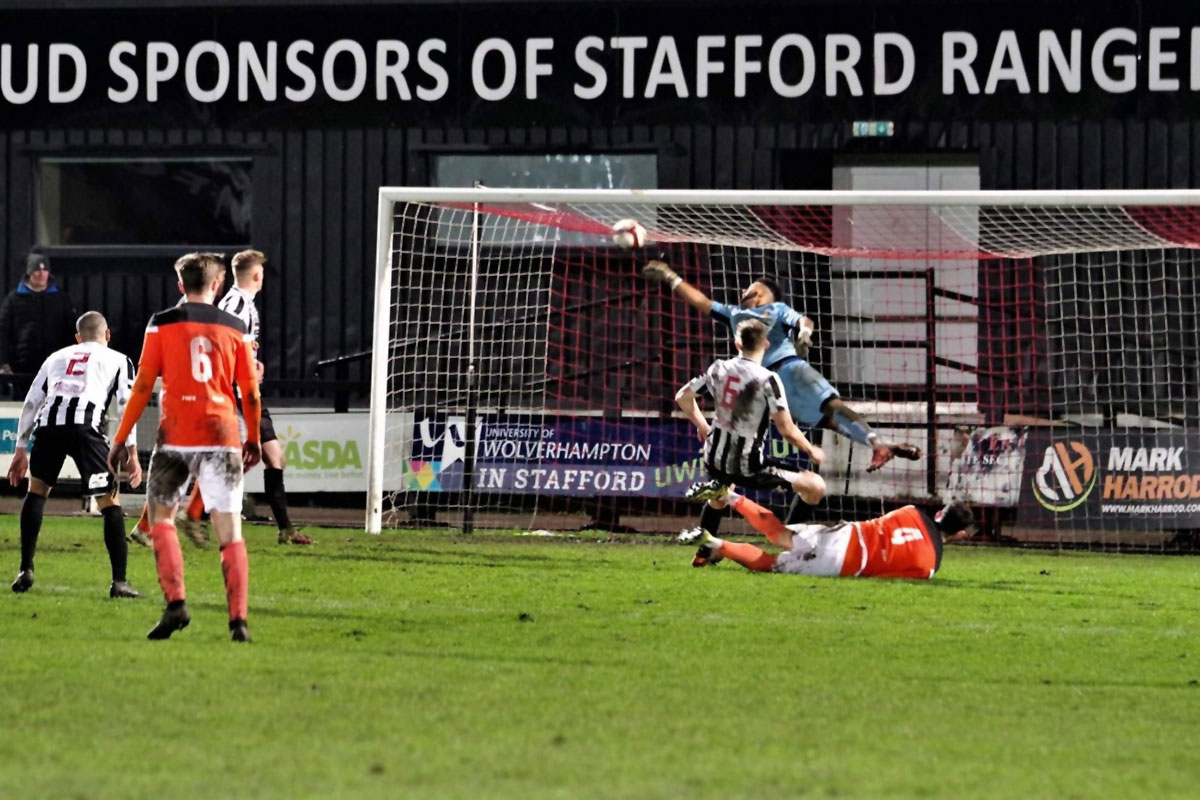 There was late penalty drama as Stafford Rangers earned some light relief from their league troubles as they progressed to the semi-finals of the Walsall Senior Cup. The game marked the first meeting with former managerial team of Neil Kitching and Nick Amos who took over the Mikes earlier in the season, but it was the current combination of Alex Meechan and Andy Fearn who won through. For Rangers, keeper Lewis King was still absent, meaning that Jono Brown retained his place and the newcomer was a contender for the man of the match award after making several crucial saves.
The visitors, who play two steps below Rangers in the Midland Football League Premier Division, made a bright start as Kyle Byrne fired across the face of goal inside two minutes. Rangers responded soon after through Jed Davies who fired low at visiting keeper Matthew Coton before Jack Sherratt deflected Brad Grayson’s shot into the net only to be ruled offside. Byrne wasted a golden opportunity when he was put clear by Daniel O’Sullivan but fired wide from the edge of the area. Byrne then completed a hat trick of missed chances when he somehow managed to turn the ball over from inside the six-yard box after good work from Jarrell Hylton. Hylton set up Owen Parry but Brown was out quickly to make a block tackle and the Rangers’ keeper denied the same Mikes’ player with another good save a minute later. The visitors continued to create the better chances as Byrne missed again with a shot that flashed across the face of goal but gradually their steam ran out and the final 15 minutes of the first half saw Rangers in control. Coton saved from Josh Green at the foot of his near post, Brad Grayson sent one over from 18 yards out, but the best chance fell to Robert Thompson-Brown who shot wide after a good pass from Grayson. Grayson had the first chance after the interval, but the angle was tight and Coton saved. Sam Coulson was next to be denied by Coton when the Mikes’ keeper kept out his header then Joseph Lyng cleared away from Jake Charles. At the other end, Byrne missed the target yet again and Tom Massey shot over from the edge of the area. The deadlock was finally broken on 70 minutes and it was Rangers who got the breakthrough. Charles found space on the left-hand side of the area and squared for Grayson to side foot home from close range. A Parry free kick went close to bringing Boldmere level - the ball going a foot over the top corner of the Stafford goal - before Brown made two crucial saves, firstly keeping out Lyng’s header then diving spectacularly to his right to turn away another header, this time from Harry Craven. But, as the clock reached 90 minutes and Rangers seemingly advancing unscathed, Boldmere were awarded a penalty when Byrne was pulled to the ground and sub Harry Crook stepped up to level matters. With no extra time, the tie now looked to be heading for penalties and indeed it was a penalty that settled matters as Charles fired Boro’s winner from the spot in the 4th minute of added time after he had been tripped by Luke Barlone. Referee: Jonathan Maskery Cautions: None
Stafford Rangers: 1 Jono Brown, 2 Paul Bignot, 3 Josh Green, 4 Jon Moran, 5 Dan Burns, 6 Sam Coulson, 7 Robert Thompson-Brown (14 Dan Hawkins 46m), 8 Jed Davies (15 Jaidan White 61m), 9 Jake Charles, 10 Bradley Grayson (14 Kamar Moncrieffe 76m), 11 Jack Sherratt. Unused Subs: 12 Josh Burns, 17 Joe Berks
Boldmere St Michaels: 1 Matthew Coton, 2 Brandon Williams, 3 Harry Sweeney, 4 Harry Craven, 5 Joseph Lyng, 6 Tom Massey, 7 Daniel O’Sullivan (15 Jack Burgess 68m), 8 Stephen Palmer (16 Luke Barlone 76m), 9 Jarrell Hylton (17 Harry Crook 83m), 10 Owen Parry, 11 Kyle Byrne. Unused Subs: 12 Nathan Binner, 14 Jack Skinner